Clean Harbors acquired 100% of Eveready’s outstanding common shares in exchange for USD $56 million of available cash, USD $118 million in Clean Harbors’ common stock consisting of 2.4 million shares, and the assumption of approximately USD $235 million of Eveready debt. Excluding all one-time fees and acquisition-related expenses, Clean Harbors expects the acquisition will be accretive in the first full quarter of combined operations.

“This transaction sets a strong foundation for our growth in the years ahead,” said Alan S. McKim, Chairman and Chief Executive Officer. “Eveready brings to Clean Harbors an outstanding combination of talented people and valuable assets that substantially extends our capabilities in both the environmental and industrial services marketplace. We anticipate considerable cross-selling opportunities for our combined organization as we greatly expand the range of services we can now offer customers of both companies. The acquisition also significantly broadens our geographic footprint and increases our presence throughout Canada.”

“Culturally, we believe our two organizations are a great match,” McKim said. “Our ability to complete the acquisition on schedule is a testament to the hard work of both teams, who have worked tirelessly since this past Spring to rapidly bring this deal to a close. Based on our experience with prior acquisitions, we anticipate quickly integrating Eveready’s portfolio of assets and beginning to capture the significant upside potential we envision from the combined company.”

“Our integration team has already begun identifying where we believe we can reduce costs, optimize utilization of our combined assets and streamline our back-office and administrative functions by bringing Eveready’s disparate systems onto our unified platforms,” McKim said. “Through some reductions in redundant headcount, economies of scale in procurement and the implementation of our industry-leading processes, we expect to realize approximately $15 million in synergies in 2010 and an additional $5 million in synergies in 2011.”

Board of Directors Appointment

Clean Harbors also announced today the appointment of Rod Marlin, Eveready’s President and Chief Executive Officer, to Clean Harbors’ Board of Directors, which now has ten members including Mr. Marlin. Mr. Marlin has been actively involved with Eveready since 1995 and was the company’s President and Chief Executive Officer since 2002. “Rod’s deep understanding of the Canadian environmental and industrial services marketplace will be invaluable to Clean Harbors as we embark on this next phase of our growth,” McKim said. “We are strengthening our Board with this appointment, and we look forward to benefiting from Rod’s counsel.”

EBITDA (see description below), which also was reduced by the $3.3 million in acquisition-related expenses, was $31.3 million compared with $43.4 million in the second quarter of 2008.

“While we experienced a sequential increase in revenue from the first quarter, our second-quarter performance fell short of our expectations as the challenging economic conditions continued to weigh heavily on several areas of our business,” said McKim. “Specifically, our results were affected by a number of factors including project delays by customers; ongoing weakness within our chemical, manufacturing and utilities verticals; and limited emergency response work.”

“Within our Technical Services segment, our results for the quarter were mixed,” McKim said. “Utilization during the quarter at our incineration facilities, which includes most of the 50,000 tons of capacity added in the past year, was 88%, consistent with the prior year level. Landfill volumes were up 10% year-over-year, although down from first-quarter volumes as a result of the significant reduction of project work. Our TSDF locations and general labor and transport business saw an overall decline as a result of the ongoing slowdown in certain industry verticals. A bright spot within Technical Services during the second quarter was our solvent recovery business, which continues to be a steady contributor. We made some enhancements to our Ohio facilities during the quarter to further capitalize on our momentum in this area. In addition, we remain on track with the second phase of our solvent recovery plant expansion at our El Dorado location, which we anticipate will be completed by the first quarter of 2010.”

“Within Site Services, we experienced a steep drop-off in projects, particularly from our petrochemical, specialty chemical, manufacturing and utilities clients, which are continuing to conserve their capital,” said McKim. “The silver lining to this shortfall is that the vast majority of these projects have been delayed rather than cancelled, and we are beginning to see a pick up in activity this quarter.”

“Despite the revenue shortfall, our ongoing cost control initiatives enabled us to generate relatively healthy EBITDA margins of 14.5%. If we exclude acquisition-related costs, our EBITDA margin would have exceeded 16%. In light of the challenging near-term environment, we continued to right-size our organization, and have reduced our non-billable headcount to its lowest level in several years,” McKim said. “We also continued to maintain a healthy balance sheet and strong capital position. We closed the second quarter with cash and equivalents of more than $255 million.”

Clean Harbors reports EBITDA results, which are non-GAAP financial measures, as a complement to results provided in accordance with accounting principles generally accepted in the United States (GAAP) and believes that such information provides additional useful information to investors since the Company’s loan covenants are based upon levels of EBITDA achieved. The Company defines EBITDA in accordance with its existing credit agreement, as described in the following reconciliation showing the differences between reported net income and EBITDA for the second quarter and first six months of 2009 and 2008 (in thousands):

In connection with the closing of the Eveready acquisition, the Company will be re-aligning and expanding its operating reporting segments. This new structure reflects the way management will make operating decisions and manage the growth and profitability of the business. Under the new structure, the Company intends to report its business in four operating segments, including:

Based on the closing of the Eveready acquisition, financial results for the first half of 2009, and current market conditions, Clean Harbors expects full-year 2009 revenue for the combined company in the range of $1.13 billion to $1.16 billion, and full-year 2009 EBITDA in the range of $173 million to $180 million, inclusive of a five-month contribution from Eveready.

“We expect the Eveready acquisition to greatly benefit Clean Harbors in 2010 and beyond,” said McKim. “We expect to see a rebound in many of our end markets in the coming year and an improvement in our project business, which will ultimately drive volumes to our network of disposal facilities. We anticipate demand for industrial maintenance and production, lodging, and exploration services to increase in 2010 from 2009 levels. We are targeting approximately $15 million in cost synergies in 2010 through reductions in redundant headcount, economies of scale in procurement and the implementation of our back-office systems and processes.”

“We believe that the Eveready acquisition will be a long-term growth engine for Clean Harbors,” McKim said. “Not only does this transaction expand our footprint, but it provides us with valuable new resources in some of our end-markets. With the closing now behind us, we look forward to completing the integration process, introducing our world-class brand to new customers and driving top- and bottom-line improvements at the newly expanded Clean Harbors in the quarters ahead.”

Clean Harbors is North America’s leading provider of environmental, energy and industrial services serving over 50,000 customers, including a majority of the Fortune 500 companies, thousands of smaller private entities and numerous federal, state and local governmental agencies.

Within Clean Harbors Environmental Services, the Company offers Technical Services and Field Services. Technical Services provide a broad range of hazardous material management and disposal services including the collection, packaging, recycling, treatment and disposal of hazardous and non-hazardous waste. Field Services provide a wide variety of environmental cleanup services on customer sites or other locations on a scheduled or emergency response basis. 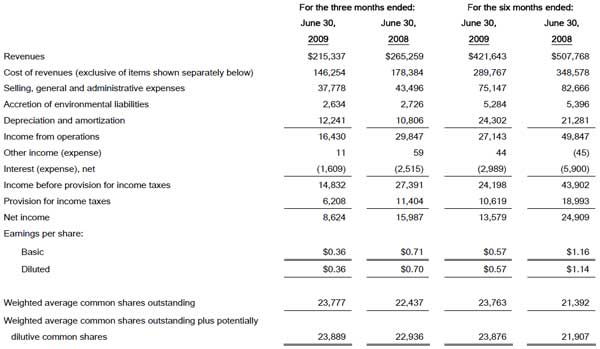 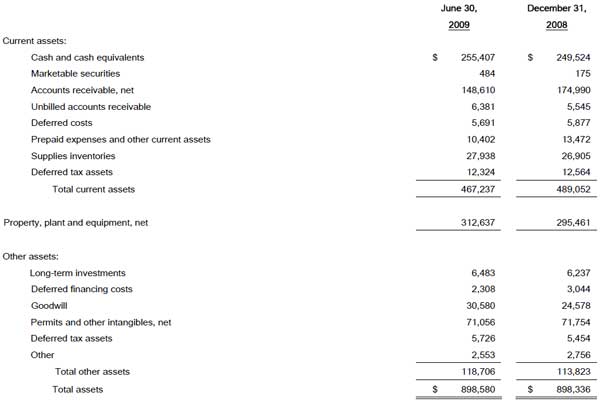 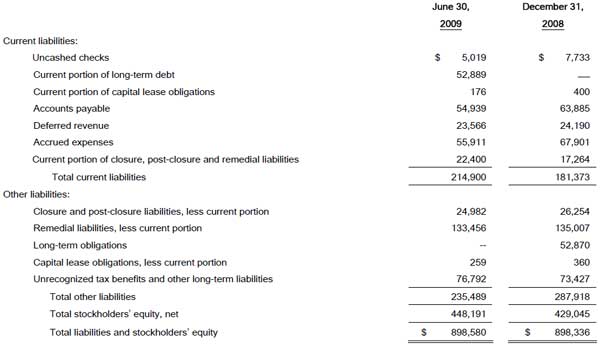