The Company concluded the first quarter with cash and marketable securities of $535.9 million, compared with $305.4 million at December 31, 2010. The increase in cash is primarily the result of the Company’s $250 million senior secured notes offering in March 2011.

Comments on the First Quarter

“Our first-quarter performance reflects broad-based growth across all of our segments,” said Alan S. McKim, Chairman and Chief Executive Officer. “Within our Environmental business, we achieved revenue growth of nearly 30% at our TSDFs (Treatment, Storage and Disposal Facilities), while revenue at our wastewater treatment plants increased more than 50% as a result of refinery and frac water-related volumes. Utilization at our incineration facilities and landfills was steady in what is typically the Company’s seasonally weakest quarter. Across our network, momentum continued from the large-scale project work that began to accelerate in late 2010, resulting in more than 25% growth in our Field Services segment. Within our Energy and Industrial business, the prolonged cold weather in Western Canada supported an extended period of drilling activity. Investments in U.S. gas and oil production also continued, driving steady demand for our services. In particular, lodging and exploration each generated exceptionally strong year-over-year results.”

“We leveraged our extensive network of assets to grow our first-quarter 2011 EBITDA by 38% – a far greater rate than our revenues,” McKim said. “We increased our EBITDA margin year-over-year by more than 170 basis points to 15.5% as we successfully implemented pricing initiatives and tightly managed overall costs. In addition, we were effective at passing through higher fuel expenses in the quarter.”

“We recently signed a definitive agreement to acquire Peak Energy Services of Calgary – a transaction that will significantly expand our presence in oil and natural gas drilling and production support. During the first quarter, we also agreed to acquire another Canadian company, Badger Daylighting. As we announced last week, we did not receive the required 66 2/3 percent of the votes cast by Badger shareholders, despite the support of Badger’s Board of Directors, executive management and two leading independent shareholder advisory firms. But that decision has not diminished our intention to further expand through acquisitions. During the first quarter, we successfully raised $250 million in senior secured debt at favorable rates. With more than a half billion dollars in cash and cash equivalents on our balance sheet and the Peak transaction underway, we are moving forward on additional opportunities in our active acquisition pipeline.”

The acquisition of Peak Energy Services for approximately CAD $196 million is expected to be completed during the second quarter of 2011. The transaction remains subject to approval by regulators and Peak shareholders, as well as other customary closing conditions. Each of the directors and officers of Peak and Deans Knight Capital Management Ltd., collectively holding 53.6% of the Peak shares, have entered into agreements in which they have agreed to vote their shares in favor of the acquisition at the Peak shareholders’ meeting, now scheduled to be held on May 25, 2011.

Clean Harbors reports EBITDA results, which are non-GAAP financial measures, as a complement to results provided in accordance with accounting principles generally accepted in the United States (GAAP) and believes that such information provides additional useful information to investors since the Company’s loan covenants are based upon levels of EBITDA achieved. The Company defines EBITDA in accordance with its existing credit agreement, as described in the following reconciliation showing the differences between reported net income and EBITDA for the first quarter of 2011 and 2010 (in thousands):

“We concluded 2010 with strong momentum that has carried into fiscal 2011,” McKim said. “In the first quarter, we recorded double-digit year-over-year increases in all four of our newly aligned reporting segments – Technical Services, Field Services, Industrial Services and Oil & Gas Field Services. Looking ahead, we remain encouraged about our prospects for profitable growth. The underlying economic and outsourcing trends remain favorable for Clean Harbors. Our comprehensive efforts to reduce our cost infrastructure – even while investing heavily in our business – have proven to be effective as we continue to expand our margins. In addition, our acquisition pipeline remains active and we are in the process of evaluating a number of potential opportunities.”

Based on its first-quarter performance and current market conditions, Clean Harbors is increasing its 2011 annual revenue and EBITDA guidance. The Company currently expects 2011 revenues in the range of $1.62 billion to $1.67 billion, up from its previous revenue guidance of $1.54 billion to $1.59 billion. For 2011, the Company now expects EBITDA in the range of $275 million to $284 million, an increase from its previous guidance of $262 million to $270 million. This guidance is exclusive of any potential future acquisitions, including the Company’s planned purchase of Peak Energy Services. 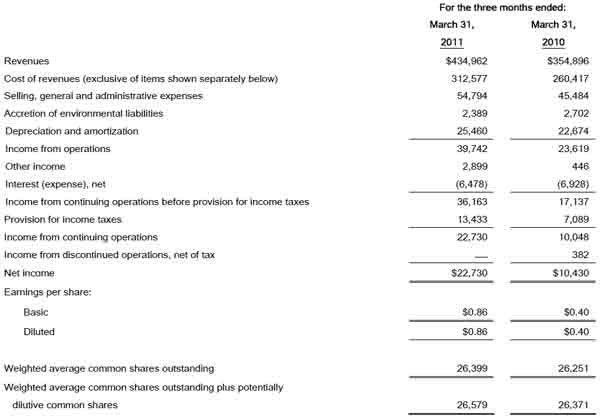 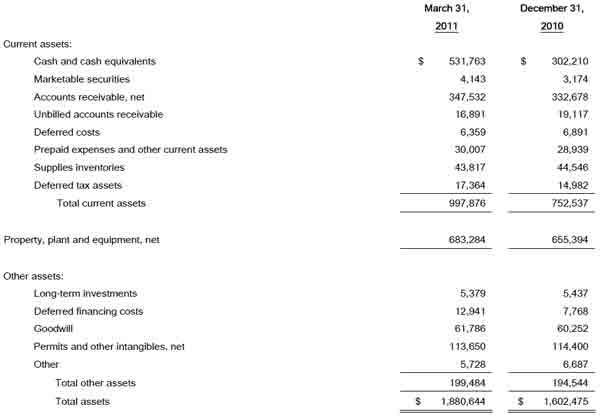 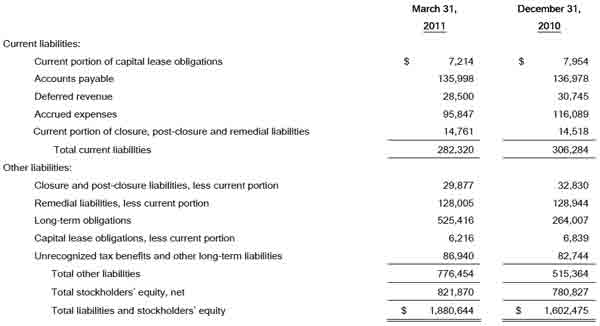