“Our fourth-quarter performance benefited from strong sales growth at our core operations; however, a number of external factors affected our results, particularly our top-line, which came in below our guidance,” said Alan S. McKim, Chairman and Chief Executive Officer. “First, we saw unfavorable top-line currency effects as the Canadian dollar continued to decline during the quarter. Second, as fuel prices decreased in the quarter, we recorded lower-than-anticipated fuel surcharge revenue. Third, the rapid drop in commodities pricing during the quarter significantly affected our resale of recycled oil, copper and other metals. Fourth, we had an unscheduled 11-day shutdown at our El Dorado incinerator mid-quarter for emergency repairs. And finally, we saw many customers closing plants and shutting down operations during the holiday season in an effort to conserve cash and curtail spending.”

“Despite the revenue shortfall, we generated a healthy EBITDA margin of 16.5 percent for the quarter as some of the items that reduced our revenue had a related savings benefit on our bottom-line,” said McKim. “On the cost side, we benefited from lower fuel prices throughout our system, and the weaker Canadian dollar increases the value of the U.S. dollars we hold in Canada. The primary driver behind our solid EBITDA margin in the fourth quarter was the exceptional results generated by our incineration facilities and landfills within our Technical Services segment. Even including the additional capacity we rolled out in 2008, incineration utilization was a record 98 percent in the quarter. This is even more impressive in light of the unscheduled El Dorado shutdown. Our landfills also outperformed in the quarter, with total landfill volumes more than 20 percent higher than in the fourth quarter of 2007.”

“Within our Site Services segment, we achieved some incremental year-over-year growth in the fourth quarter as we experienced steady contributions from the service locations we acquired from Universal Environmental and the additional branches we opened throughout the year,” McKim said. “In the fourth quarter, we continued our geographic expansion with the opening of a service location in Roebuck, South Carolina, which brought our total of new service locations opened in 2008 to six – meeting our annual goal. Emergency response revenue totaled approximately $4 million in the quarter, with the bulk of that work related to the Gulf region due to the hurricanes that occurred in September.”

“In 2008, we achieved more than one billion dollars in annual revenue—a goal that we established three years ago,” said McKim. “This milestone is a testament to the quality of our team and the relationships we have developed with our customers. In addition to our full-year revenue growth, 2008 was characterized by achievements on many other fronts. We expanded our incineration capacity by 8 percent, broadened our geographic reach, successfully completed several tuck-in acquisitions, which expanded our recycling capabilities and Site Services footprint, and garnered recognition for our outstanding health and safety performance, including a fifth facility with VPP (Voluntary Protection Program) Status – OSHA’s official recognition for exemplary health and safety track records.”

“Our full-year results also once again demonstrate the tremendous leverage in our business model,” McKim said. “By coupling steady sales growth across our Technical and Site Services with strict cost control initiatives, we delivered 22 percent growth in annual EDITDA on a 9 percent revenue increase. We also significantly improved our cash position during the year. By pruning back our cost structure and managing our environmental liabilities and capital spending, we generated strong free cash flow, which along with the proceeds of our April 2008 follow-on offering resulted in a twofold increase in our cash position.”

Clean Harbors reports EBITDA results, which are non-GAAP financial measures, as a complement to results provided in accordance with accounting principles generally accepted in the United States (GAAP) and believes that such information provides additional useful information to investors since the Company’s loan covenants are based upon levels of EBITDA achieved. The Company defines EBITDA in accordance with its existing credit agreement, as described in the following reconciliation showing the differences between reported net income and EBITDA for 2008 and 2007 (in thousands):

The Company also announced today that it has signed a definitive agreement to acquire EnviroSORT Inc., a privately held company that provides specialized container management, vacuum, waste management and recycling services in several Western Canadian provinces. Clean Harbors expects the acquisition to be accretive to its 2009 earnings. The acquisition, subject to customary closing conditions and regulatory approvals, is expected to be completed in the next 10 days.

With a team of nearly 50 employees, EnviroSORT was profitable and generated approximately CAD $9 million in revenues in 2008. EnviroSORT’s network of assets includes two waste management facilities, a service center, and multiple satellite locations throughout Alberta to service the oil and gas drilling industry in the Canadian provinces of Alberta, British Columbia and Saskatchewan.

“The EnviroSORT acquisition is an ideal complement to our existing network of disposal facilities and service locations in Canada,” said McKim. “As a recognized name in the Canadian waste management industry, EnviroSORT will further strengthen our presence in Western Canada. The addition of EnviroSORT’s talented staff and service locations expands our Canadian network and enhances our ability to serve our Canadian customers’ waste management needs. Furthermore, the acquisition reaffirms our steadfast commitment to expansion. Our solid balance sheet and strong cash flow generation enable us to capitalize on select acquisition opportunities that will help us extend our leadership position in the North American marketplace.”

“We are anticipating a slow start to the year,” said McKim. “The first quarter is always a challenge for Clean Harbors and is traditionally the slowest quarter of the year due to the unpredictable effect weather can have on our business. So far this year, we have experienced project delays and a slowdown in business volumes due to two factors: the economic recession and extremely poor weather conditions that have persisted across much of Canada and in the Midwest and Northeast U.S. Additionally, we expect our revenues to be negatively affected on a year-over-year basis by the weakness of the Canadian dollar and the reduction of our fuel surcharge in 2009. As we look to the full year, we have a group of customers, particularly in the chemical and manufacturing industries, whose businesses are clearly declining. At the same time, we have many opportunities that could lead to solid growth in 2009. As a result of this uncertain environment, we are reducing our previously announced annual revenue guidance by two to three percentage points.”

“At the same time, we are reaffirming our full-year EBITDA guidance of 10 to 15 percent growth,” said McKim. “Over the past several months, we have further streamlined our cost structure – eliminating more than 250 General and Administrative, and facility positions – while at the same time adding more than 100 sales positions. Even with expected annual organic revenue growth of 3 to 4 percent, we believe that the leverage inherent in our network of assets will enable us to continue to grow EBITDA at relatively high margins.”

“We expect our revenues and EBITDA growth to be skewed toward the second half of the year,” McKim said. “While we have seen some drop-off in certain industries, our landfills and incinerators have maintained a solid backlog of volumes as we head into 2009. We believe the recent expansion of our sales force will become more beneficial to us as the year progresses. In addition, the federal economic stimulus package directs substantial funds to areas in which we successfully compete, such as environmental cleanups at Superfund sites, DOE sites, underground storage tanks and Brownfield locations. Also, our strong capital position affords us the financial flexibility to capitalize on strategic opportunities that may arise, including acquisitions.”

Investors who wish to listen to the fourth-quarter and year-end webcast should log onto www.cleanharbors.com/investor_relations. The live call also can be accessed by dialing 877.407.5790 or 201.689.8328 prior to the start of the call. If you are unable to listen to the live call, the webcast will be archived on the Company’s website.

A variety of factors beyond the control of the Company may affect the Company’s performance, including, but not limited to:

CLEAN HARBORS, INC. AND SUBSIDIARIES
UNAUDITED CONSOLIDATED STATEMENTS OF OPERATIONS
(in thousands except per share amounts) 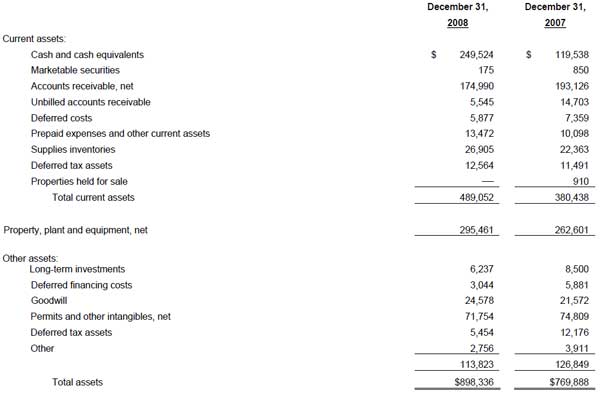 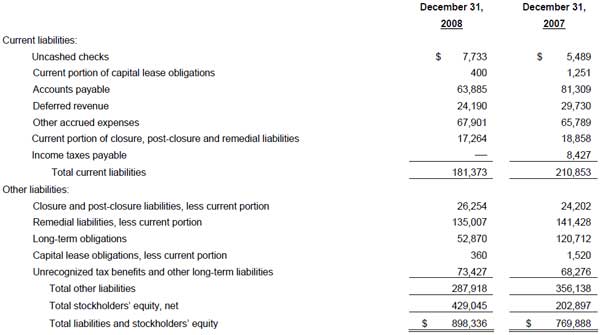