The Company concluded the second quarter with cash and marketable securities of $377.7 million, compared with $305.4 million at December 31, 2010.

Comments on the Second Quarter

“The second quarter of 2011 was another period of solid financial performance and achievement for Clean Harbors,” said Alan S. McKim, Chairman and Chief Executive Officer. “Strong contributions across our four operating segments enabled us to generate revenues of $447 million. Within Technical Services, the utilization rate at our incinerators was more than 92% with contributions from both our U.S. and Canadian facilities. Within Field Services, we saw a steady stream of projects as our core business – exclusive of emergency response events – grew approximately 20% year-over-year. In what is historically the seasonally weakest period for Industrial Services, this segment delivered double-digit growth through substantial turnaround work at our refinery customers. Despite some major wildfires in Western Canada that affected our operations in June, our Oil & Gas Field Services segment grew 40% as continued investments in gas and oil production in both the U.S. and Canada drove demand for our services. This segment also benefitted from the addition of Peak Energy Services, which we acquired on June 10.”

“The addition of Peak greatly expands our presence in oil and natural gas drilling and production support and our Industrial Services business,” McKim said. “Peak complements our service offerings and enhances our one-stop-shop approach for our customers. Peak has brought to Clean Harbors a talented work force, a well-maintained fleet of equipment, an excellent customer base and strategic locations in North America. We believe that Peak will afford us significant cross-selling opportunities going forward.”

“Our second-quarter results once again demonstrated the leverage of our network of assets as we achieved an EBITDA margin of 18.2%,” McKim said. “Excluding the 2010 Gulf oil spill event, our EBITDA growth was 28% – outpacing our revenue growth in the quarter as we continued to successfully implement our pricing initiatives, pass through higher fuel expenses, and tightly manage our cost structure.”

Clean Harbors reports EBITDA results, which are non-GAAP financial measures, as a complement to results provided in accordance with accounting principles generally accepted in the United States (GAAP) and believes that such information provides additional useful information to investors since the Company’s loan covenants are based upon levels of EBITDA achieved. The Company defines EBITDA in accordance with its existing credit agreement, as described in the following reconciliation showing the differences between reported net income and EBITDA for the second quarter and first six months of 2011 and 2010 (in thousands):

“We concluded the first half of 2011 with momentum and we are optimistic about our prospects going forward,” McKim said. “Within Technical Services, we have a considerable backlog of potential projects in our pipeline to drive substantial volumes through our disposal facilities. Activity in our Field Services segment in the third quarter will be supported by our participation in the Yellowstone River oil spill clean-up effort, which we expect will generate more than $15 million in revenue. We anticipate continued strength in our Industrials Services segment, particularly in some of our specialty lines of business. We expect the addition of Peak to amplify our growth through cross-selling opportunities in our Oil & Gas Field Services segment.”

“We enter the second half of the year with a strong cash position of $378 million that affords us significant financial flexibility. Our strategy is to apply this capital to accelerate our growth through selective acquisitions and strategic investments. At this time, our acquisition pipeline remains active and we are in the process of evaluating a number of potential opportunities,” McKim concluded.

Based on its second-quarter performance, recently completed acquisitions and current market conditions, Clean Harbors is increasing its 2011 annual revenue and EBITDA guidance. The Company now expects 2011 revenues in the range of $1.84 billion to $1.88 billion, up from its previous revenue guidance of $1.62 billion to $1.67 billion. For 2011, the Company now expects EBITDA in the range of $315 million to $320 million, an increase from its previous guidance of $275 million to $284 million. 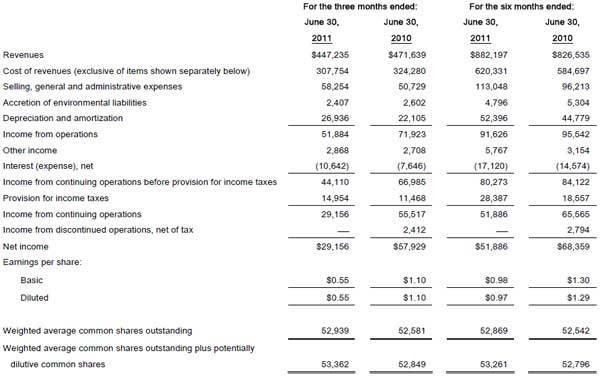 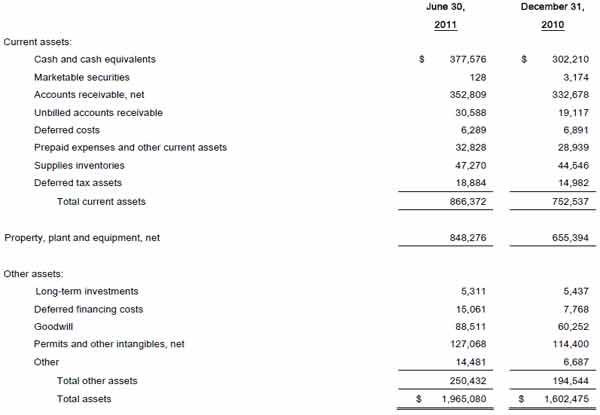 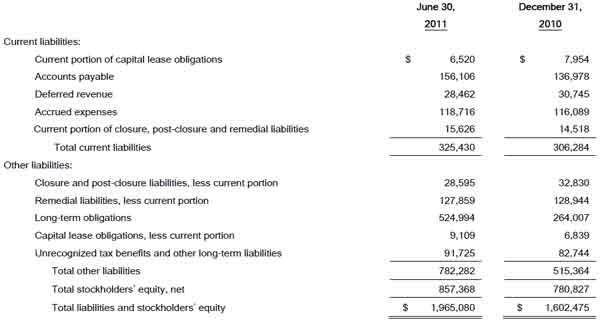