Comments on the Third Quarter

“Our results for the third quarter reflect a two-month contribution from our acquisition of Eveready, a leading provider of energy and industrial services in Western Canada,” said Alan S. McKim, Chairman and Chief Executive Officer. “Eveready, which accounts for most of our newly formed Industrial Services and Exploration Services segments, performed on plan during the quarter. Although the third quarter is seasonally one of the weakest periods for these two segments, we were pleased with their increasing contribution as they exited the quarter.”

“Overall, the adverse economic conditions we experienced in the first half of the year continued to weigh on several areas of our business in the third quarter,” McKim said. “We saw some pockets of growth and encouraging signs of stabilization across a number of our business lines, but it did not offset the prolonged project delays and ongoing weakness we continued to experience within certain verticals. Our Field Services segment was particularly affected by the continued slowdown at many of our utility and refinery customers, as well as limited remediation business. The third quarter also lacked any major emergency response events.”

“Results in our Technical Services segment mirrored the mixed performance we reported in the second quarter,” McKim said. “Utilization at our incineration facilities for the quarter was strong at approximately 89%, which includes 50,000 tons of capacity added in the past year. Without that expansion, our utilization would have topped 98%. Landfill volumes were up 15% year-over-year and more than 20% sequentially as projects delayed earlier in the year began to be released. Our solvent recovery facilities continued their recent momentum and our expansion plans for that business remain on schedule to be completed by the first quarter of 2010. Conversely, our Treatment Storage and Disposal Facilities (TSDFs) locations and wastewater treatment plants experienced a decline due to the ongoing slowdown in our petrochemical, specialty chemical and manufacturing verticals.”

“The highlight of our third-quarter performance was our ability to continue to improve our EBITDA margins,” said McKim. “Despite the lower-than-anticipated revenue, our lean cost structure and ongoing productivity initiatives enabled us to deliver EBITDA margins of 15.8%. If we exclude the acquisition-related costs of $4.1 million in the quarter, our EBITDA margins would have been approximately 17.2%. We are benefiting from the aggressive actions we have taken in recent quarters to streamline our organization, increase efficiencies and capture more of the leverage that is inherent in our extensive network of assets. We also continued to maintain our healthy balance sheet and strong capital position as we concluded the quarter with cash and cash equivalents of more than $221 million.”

“As we enter the final quarter of the year and look out at 2010, we are encouraged about our long-term prospects and see reasons for optimism around each of our business segments,” McKim said. “Our outlook for Technical Services is decidedly positive. Our incineration volumes have been consistent throughout 2009 and our capacity expansion positions us well for growth. Landfill volumes have been stable and we are maintaining a backlog of high-volume projects due to delays in 2009. We also are anticipating a rebound within our TSDFs, general labor and transport business, and wastewater plants. As we move into 2010, we expect to benefit from our ongoing initiative to cross-sell our Technical Services offerings to the Eveready customer base.”

“Within Field Services, we expect to see revenue opportunities emerge from our key verticals as they begin to recover from their prolonged slump,” McKim said. “We are excited to head into the seasonally stronger fourth and first quarters for our Exploration and Industrial Services segments. While the depressed price of natural gas is putting pressure on the Exploration segment, we remain encouraged about its overall growth prospects. For Industrial Services, we see substantial opportunities to expand in Eastern Canada and the U.S. We believe that Industrial Services has a significant amount of valuable, underutilized equipment and assets that we plan to capitalize on going forward.”

McKim concluded, “We believe that the addition of Eveready will greatly benefit Clean Harbors and its stakeholders in 2010 and beyond. We see considerable cross-selling opportunities for our combined organization as we expand the range of services we offer all our customers. The integration is proceeding well. We believe that we will capture $15 million in planned cost synergies in 2010 and $5 million in 2011, primarily from the elimination of Eveready’s public company costs, economies of scale in procurement and transitioning Eveready to our operational and back-office systems. In addition to these synergies, we have targeted approximately $20 million in potential additional expense reductions for 2010 that will help drive further margin improvement across the Company and offset some of our rising costs, such as healthcare.”

For full-year 2010, the Company is early in its budgeting process, but anticipates growth in revenues and EBITDA due to the Eveready acquisition, expected synergies and cost reduction initiatives, and modest growth in its core markets. The Company currently expects revenue in the range of $1.40 billion to $1.45 billion and is targeting an EBITDA margin of approximately 17%. The 2010 guidance includes the following assumptions: foreign exchange rate of $0.93USD to $1.00CAD, a modest economic recovery, and the absence of material project delays.

Investors who wish to listen to the third-quarter 2009 webcast should log onto www.cleanharbors.com/investor_relations. The live call also can be accessed by dialing 877.407.5790 or 201.689.8328 prior to the start of the call. If you are unable to listen to the live call, the webcast will be archived on the Company’s website.

Clean Harbors is a leading provider of environmental, energy and industrial services throughout North America. The Company serves over 50,000 customers, including a majority of the Fortune 500 companies, thousands of smaller private entities and numerous federal, state, provincial and local governmental agencies.

Within Clean Harbors Environmental Services, the Company offers Technical Services and Field Services. Technical Services provide a broad range of hazardous material management and disposal services including the collection, packaging, recycling, treatment and disposal of hazardous and non-hazardous waste. Field Services provide a wide variety of environmental cleanup services on customer sites or other locations on a scheduled or emergency response basis. 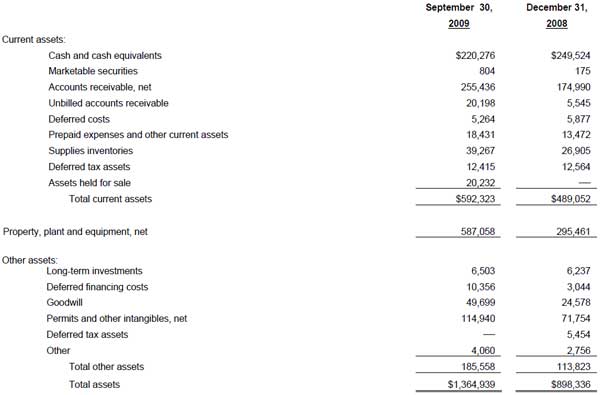 Clean Harbors reports EBITDA results, which are non-GAAP financial measures, as a complement to results provided in accordance with accounting principles generally accepted in the United States (GAAP) and believes that such information provides additional useful information to investors since the Company’s loan covenants are based upon levels of EBITDA achieved. The Company defines EBITDA as described in the following reconciliation showing the differences between reported net income and EBITDA for the third quarter and first nine months of 2009 and 2008 (in thousands):